Introduction to the Pillars of Prophetic Validity

“Beloved, believe not every spirit, but try the spirits whether they are of God: because many false prophets are gone out into the world” (I John 4:1).

I wrestled with the question of Ellen White's prophetic authority for many years. I was raised in a conservative Seventh-day Adventist family, and we tried hard to live by the testimonies of Ellen White which we believed to be prophetic messages from God. Sadly, I never felt at peace. I knew I didn't measure up to the standards set forth in Ellen White's books, and I responded by trying harder. If only I had more faith and exerted more effort, surely that would be enough, I thought. But as the years went by, I never seemed to make any progress toward holiness. I often felt I was taking one step forward and sliding two steps back. I nearly gave up all hope of being saved. Then I decided to take a close look at Ellen White in light of the Bible. Is Ellen White a true prophet according to the biblical tests of a prophet? I had to know the answer, no matter where the truth might lead.

From 1844 until her death in 1915, Ellen G. White received repeated visionary experiences which shaped and guided the Seventh-day Adventist Church.  Due to her apparently miraculous public visions during which she appeared not to breathe, Adventists began referring to her messages as the “Spirit of Prophecy.” A four-volume set of her early books was entitled The Spirit of Prophecy. This set served as a forerunner to her famous Conflict of the Ages set, which includes The Great Controversy and The Desire of Ages, two of Ellen White's most famous books. By titling a set of her early books The Spirit of Prophecy, Ellen White clearly accepted the prophetic mantle with all the authority and responsibilities of a prophet of God.

In her later years, Mrs. White was reluctant to be called a prophetess, but she was definite about her divine calling.  In 1905, she wrote,

“Others have called me a prophetess, but I have never assumed that title. I have not felt that it was my duty thus to designate myself. Those who boldly assume that they are prophets in this our day are often a reproach to the cause of Christ.  My work includes much more than this name signifies. I regard myself as a messenger, entrusted by the Lord with messages for His people” (3SM 74).

Ellen White’s claim to be a messenger, which means being “more than” a prophet, should be carefully considered, for she is actually laying claim to the mantle of John the Baptist.  Jesus declared, “But what went ye out for to see?  A prophet? yea, I say unto you, and more than a prophet.  For this is he, of whom it is written, Behold, I send my messenger before thy face, which shall prepare thy way before thee.  Verily I say unto you, Among them that are born of women there hath not risen a greater than John the Baptist . . . .” (Matt. 11:9-11).

In 1897, Ellen White stated her understanding of the quality of her divine revelations: “The message the Lord has given me to bear has been in a straight line from light to light, upward and onward from truth to advanced truth” (3SM 74).  Whether one refers to Mrs. White as prophetess or messenger of the Lord, it is clear that in her mind, there was no doubt that all of her visionary experiences were from the Lord, and that even though she grew in her prophetic understanding, the growth was from simple to complex truths.  In other words, the early visions were just as true as the later ones.

The Seventh-day Adventist Church's Fundamental Belief #18 states that Ellen White's "writings are a continuing and authoritative source of truth." Does Ellen White meet the scriptural tests of a true prophet?  The Bible repeatedly warns against following false prophets.  Blind spiritual guides can only lead to perdition.  However, it would be perilous to reject true revelations from God.  Therefore, every prophetic claim must be painstakingly compared to the teaching of scripture, using minds illuminated by the Holy Spirit.  Eternal destinies are at stake.

Seventh-day Adventists have typically applied four texts as tests of a prophet: Isaiah 8:20 (faithfulness to scripture), Jeremiah 28:9 (fulfillment of predictions), I John 4:2 (testimony regarding Jesus Christ), and Matthew 7:20 (fruits of the prophetic ministry).  To these four, I will add the test of honesty on the basis of Revelation 21:8.

True prophetic ministry is supported by the five biblical pillars: honesty and integrity, faithfulness to scripture, accuracy of prophecies, testimony regarding Jesus, and the fruits of ministry.  All prophetic claims must be evaluated based on these pillars.

In this study, crucial questions will be asked in relation to these five pillars.  If Ellen White’s ministry fails one or more of the crucial questions, the pillars would become unstable, leading to a disintegration of the edifice of her prophetic claims.  I hope these studies will encourage clarity, reflection, and love for God. 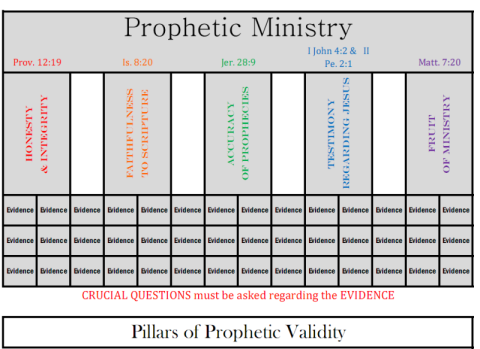 Continue to the 1st Pillar:  Honesty and Integrity